In the Tropical Pharmacology Lab, we have a strong focus on discovering toxin-targeting antibodies of human origin. Together with our collaborators, we employ phage display technology, which is a powerful tool for rapid discovery of antibodies against a given target.

Phage display technology involves the expression of a library of antibody fragments engineered to take place on the coat proteins of a phage virion, while the DNA encoding each individual antibody fragment variant is located on the inside of the phage.

Then, in vitro selection is performed by attaching the target of interest to a plate well or bead, and allowing the phages expressing antibody fragments with high affinity towards the target to bind to the target molecule by panning these into the well or bead. After sufficient incubation time, unbound phages are washed away, leaving behind only the phages containing high affinity antibody fragments. The strongly bound phages can then be eluted, amplified in E. coli, and subjected to additional rounds of panning, leading to an enriched pool of phages containing antibody fragments with very high binding affinities towards the target of interest. The phages are after a few cycles isolated as monoclones and characterized by methods such as ELISA and DNA sequencing, where after the antibody fragments are expressed or synthesized for further functional screening.

Since the first antibody fragment phage display library was developed by our collaborator Dr. John McCafferty and his colleagues in 1990, antibody discovery has significantly taken up speed due to the speed of performing phage display selection and the associated high success rate of discovery projects within this field. Within the development of recombinant antivenoms based on mixtures of human antibodies, phage display technology has been employed a number of times to identify both murine and human scFvs (single chain variable fragments) and camelid heavy chain fragments that target snake toxins (read more about this here). 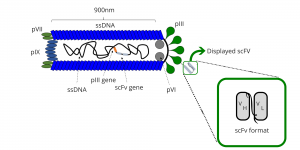 Once interesting antibody fragments have been identified using phage display technology, we in the Tropical Pharmocology Lab are able to convert these fragments into different formats, such as human IgG, Fab, or scFv depending on the therapeutic properties desired for the antitoxin.